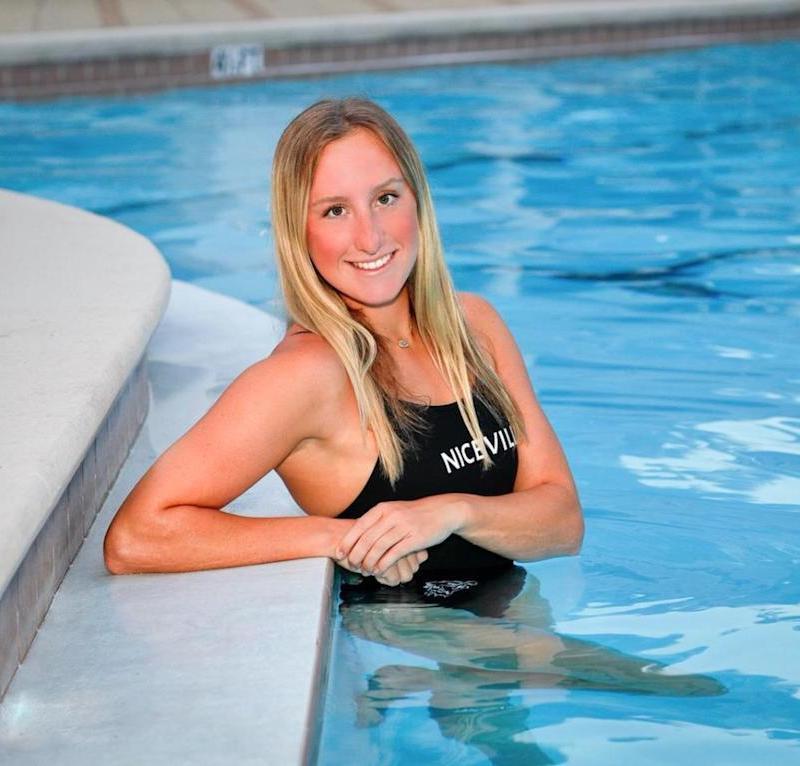 Niceville High School senior Page Dolloff leads by example in the classroom, as a two sport athlete (swimming and tennis), and in the local community. She is ranked #1 in her senior class of nearly 500 students. She earned a National AP Scholar Award and is the Niceville High School Heisman Scholarship School winner for 2021.

As a senior captain, she led her Swim and Dive team to a seventh place finish at State. Individually, she medalled in the 200 Free and swam the anchor leg on the 200 Medley Relay which placed second in the state. Small wonder she was recently named Girls Swimmer of the Year by the Northwest Florida Daily News. For her career, she is a 10-time District champion, 4-year Regional qualifier, and a 4-year State qualifier.

In tennis, she was instrumental in Niceville winning District and Regional championships and finishing in the State final four.

As President of Niceville’s Key Club, she orchestrated a food drive, beach cleanup, back-to-school programs, and a campaign to write cards to the elderly. She served as a camp counselor for Vacation Bible School, helped Ruckel Middle School’s swim program, and assisted with weekly meal deliveries through Supper on Saturday. When asked what she considers her greatest accomplishment, it wasn’t her excellence in academics or athletics.

She said, “It’s the feeling I get when I help others. It is fulfilling like no other and my
greatest accomplishment.” She credits her parents for her success.

As for being named the 2022 Female Scholastic Award winner, Page said, “I was more than honored to be nominated for this award and to win is an even a greater accomplishment. It is a tremendous feeling knowing how many talented athletes we have in this area. I couldn’t have done it without all of my supporting teammates, coaches, and parents. To be recognized by this association and represent Niceville High School is truly amazing.”

Page has accepted an appointment to the United States Air Force Academy after being nominated by Florida Senator Marco Rubio. At the AF Academy she will compete on the Falcons’ Swim and Dive team. After earning her commission, her goal is to lead from the sky as a fighter pilot and on the ground as an aerospace engineer.